Corridor 1 connects Europe with East Asia, linking the border of the Russian Federation with the Xinjiang Uygur Autonomous Region in the People’s Republic of China, through the Republic of Kazakhstan and the Kyrgyz Republic:

Corridor 1 includes 13,600 km of roads, 12,000 km of railway, three airports and a logistic center. It is the most important transit route for Chinese exports to Europe, being the corridor with the most intense activity in terms of exports, imports, and transit of commodities in CAREC region (both on road and railway). Due to a high level of trade between Europe and China, this corridor has important perspectives for economic growth and investment.

Perishable goods, such as fruits and vegetables, totalize 40% of all commodities that pass through Corridor 1, being transported mainly on roads, as it is more flexible. Industrial goods, raw materials and sizeable commodities (such as wood, metals, minerals, or cars) are transported on railway.

The biggest project implemented throughout Corridor 1 is KAZ IP 4, whose goal is to increase transport efficiency across the corridor linking Western Europe and the West of China. The total project value reaches USD 2.5 billion, and it involves the improvement of multiple road segments (2,450 km). Another major project developed inside Corridor 1 starting from 2009 focused on the rehabilitation of several highway segments (480 km) in Zhambyl region in Kazakhstan, which represents a major route between Central Asia states, China and Russia. The project’s four tranches totalized investments of more than USD 1 billion.

In 2008 another project was started, focused on modernizing several parts of Bishkek – Torugart road (234 km) that links Kyrgyzstan with other countries in Central Asia and China. To date, the project was implemented in four tranches with a total value of USD 180 million. Road infrastructure on the road linking Taraz city with Southern Kazakhstan border region was also improved, involving total investment of USD 186 million.

Projects implemented to date throughout Corridor 1 were focused both on developing infrastructure in this corridor, as well as improving its connectivity with other corridors. For instance, the road linking Aran village in Kyrgyzstan with Corridor 3 through Suusamyr valley (91 km) was rehabilitated and a road linking the capital cities of Aktobe and Artyrau provinces in Western Kazakhstan, at the intersection between corridors 1b and 6b (300 km), was reconstructed. A part of the road connecting Shymkent, one of the biggest industrial cities in Kazakhstan, placed at the intersection between Corridors 1 and 3, and Tashkent, Uzbekistan’s capital city, was also rehabilitated.

The Action Plan for CAREC Transport and Trade Facilitation Strategy presents four new projects that will be implemented until 2020: three of them are focused on improving border crossing points in Dostyk, at the border between Kazakhstan and China (road and rail), while the fourth will develop a major logistic center at Khorgos (in China, at the border with Kazakhstan). The Action Plan also proposes a shift in investment from road to railway infrastructure, taking into account a series of railway projects involving electrification, rehabilitation and repair facilities. 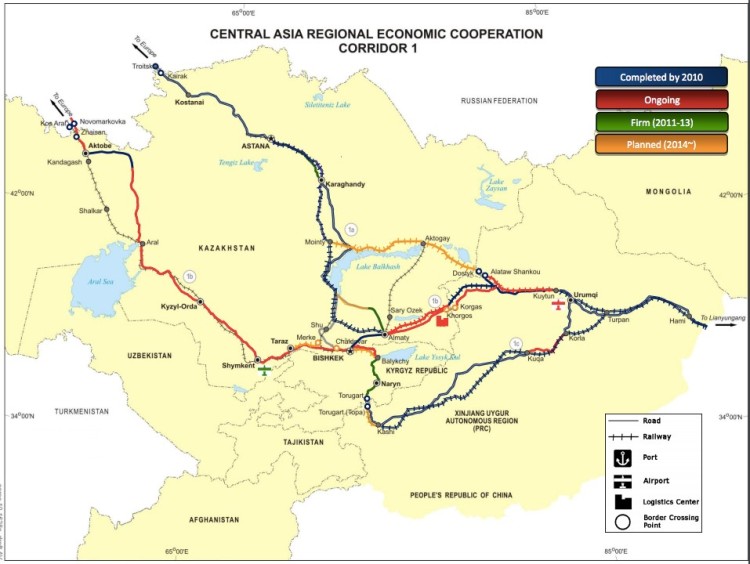 Published by Chamber of Commerce and Industry Romania-Turkmenistan

The Chamber of Commerce and Industry Romania-Turkmenistan (CCIRom-Tkm) is a non-governmental organization of public utility, autonomous and apolitical, founded in 2009 to promote the economic cooperation between Romania, Turkmenistan and other countries in the Central Asian region. View more posts